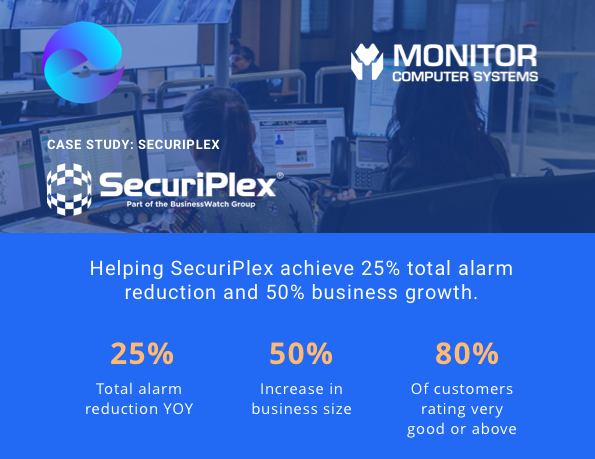 Founded in 1989, Securiplex are established as one of the UK’s leading suppliers of integrated electronic fire and security systems. They provide electronic security services including installation, monitoring and access control for domestic and business purposes nationwide.

In 2017, SecuriPlex were operating a small Alarm Receiving Centre (ARC) yet received the volume of alarms you would expect from a significantly larger ARC. To manage such a heavy workload, they were having to employ a large volume of operators, while also facing issues with bandwidth, servers and storage. SecuriPlex realised that the number of staff they needed to employ was above the average for the number of sites monitored and saw the impact this had on their margins and opportunity for growth.

Their first step was to acquire the Sentinel alarm and video receiving platform. This system enabled Securiplex to run a stable scalable platform which supports 90 different CCTV manufacturers’ equipment. Sentinel also has the advantage that video alarm trigger footage from any of the supported CCTV systems can be forwarded to Calipsa for false alarm analysis. Calipsa returns the video clip with bounding boxes added and a remarkably accurate assessment of the probability that this is a false alarm.

SecuriPlex wanted to reduce the amount of alarms coming in so that they could decrease the workload of their current staff and increase their capacity to take on more business. They weren’t looking to reduce staff, rather improve the efficiency of their existing team.

Calipsa is the best investment we have ever made. The team are an absolutely brilliant bunch of people and the product actually works. Any doubts we had at the beginning were completely erased when we saw the benefits of Calipsa to our business.

They started testing Calipsa’s False Alarm Filtering Platform in combination with Sentinel and immediately saw a significant reduction in false alarms, and lower misses of true alarms. SecuriPlex now connect Calipsa to over 900 cameras via Sentinel, and use Calipsa’s false alarm filter to reduce the amount of alarms received to their ARC.

Since working with Calipsa, SecuriPlex have seen continuous reductions in the total number of alarms received, allowing them to grow their business and improve profitability, without hiring additional staff.

By achieving a 25% reduction in alarms received in 2019 vs 2018, SecuriPlex have been able to grow the size of the business by 50%. Where previously this would have meant increasing the headcount of their 18 person ARC team by 50%, with the help of Calipsa only one additional member of staff was required. They have also seen continuous improvements in service, with 80% of customers rating SecuriPlex as very good or above.

Having seen what it can do, SecuriPlex believe there is more to gain and plan to put as many cameras as possible through Calipsa to continue improving false alarms.

#7dccfe “Calipsa is the best investment we have ever made.”

Find out Calipsa have helped FLR Fire and Security, part of FLR Spectron Ltd, to surpass their response time SLAs through a 60% reduction in false alarms.

Discover how Calipsa and Sentinel have helped First County Monitoring to achieve a 70-80% reduction in false alarms to their alarm receiving centre.