What is the Clery Act? Answering your questions on US campus security

In the US, colleges and universities are constantly competing to appeal to new students. Maintaining a secure campus where students and staff feel safe is just one way to stand out from the crowd.

What is the Clery Act, and why is it important to campus security?

For decades, US university safety has been largely defined by the 1990 Clery Act, or the Campus Security Act. It requires colleges and universities that participate in federal aid programs to report crimes that happen on or near campus, and annually publish crime statistics. If universities don’t comply, the US Department of Education can fine, penalise, or even suspend them from participating in federal aid programs.

Jonathan Kassa, the former director of the Clery Center for Security on Campus, wrote about the need for a more holistic, comprehensive approach to campus safety a few years ago in Inside Higher Ed. Some of his key suggestions include interdepartmental collaboration and partnerships with local law enforcement. More importantly, Kassa argues that campus security should be a year-round duty, constantly improving and developing.

While the Clery Act provides a meaningful starting point for institutions to report and reflect on the current state of safety on campus, Kassa’s Inside Higher Ed article makes a valid point - safety doesn’t just appear from recording data. It takes a multi-faceted approach and engagement with students, staff, and faculty.

Creating a safe campus for a secure future

Campuses that don’t prioritise safety can suffer long-term effects. It’s not only the current students, faculty, and staff who can be affected by high crime rates - it may also influence the decisions of prospective students.

A 2015 study asked high school parents and students about their top criteria in potential colleges. The top concern of parents was that the school had a “safe environment”, and it was the second-highest concern of students.

In a 2017 study by Harvard Business School, "The Impact of Campus Scandals on College Applications", the authors found that schools that experienced a scandal with high media coverage would see a 10% drop in applications over the following two years.

Less competitive applicant pools, or just fewer applicants in general, can leave a lasting effect on institutions and their financial success. 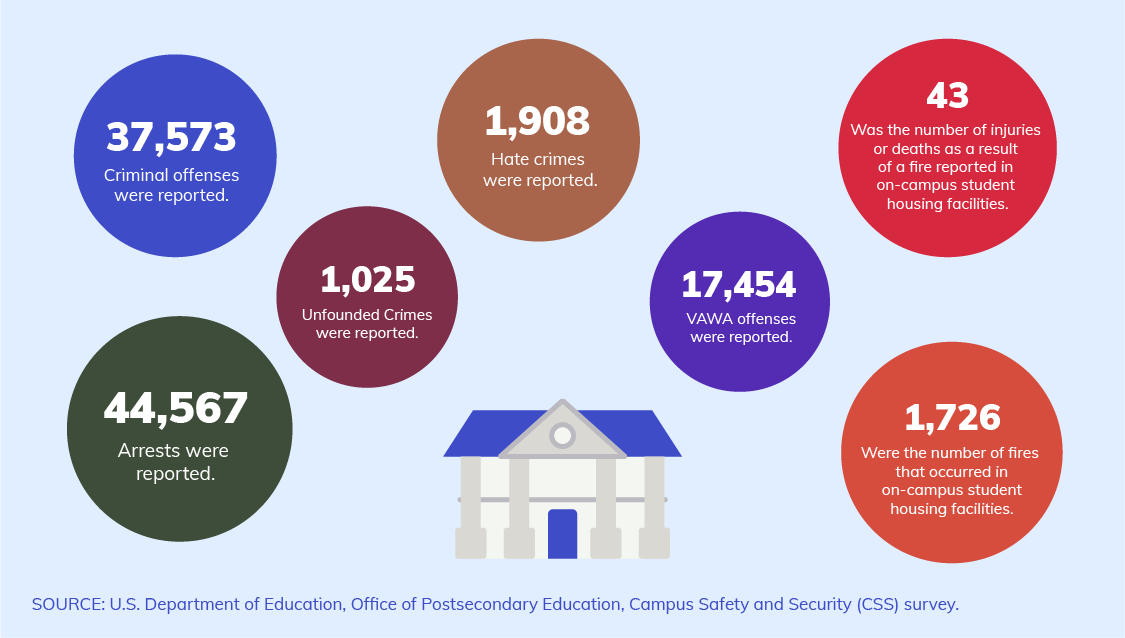 One of the ways colleges and universities stay on top of campus security is by implementing a video surveillance system. Remote video guarding systems allow campus security staff to take action quickly if there is a crime, or other type of emergency on campus. Moreover, recorded footage can be used to verify the crime after it’s taken place.

In the Campus Safety Video Surveillance Survey 2020, 94 percent of the respondents said their campuses have video surveillance systems, and of the ones who didn’t, many were planning on investing in the upcoming years. 31 percent say these systems frequently prevent crimes.

Almost half of respondents (47%) also said they would like to expand or replace their current video surveillance system, with colleges and universities being the most likely to want to get a new system. About one third (31%) of the respondents said they are using cloud technology to remotely monitor their video management systems.

The disruption of the COVID-19 pandemic underscored the many benefits of remote monitoring via cloud technology. This may inspire many institutions to take the leap forward and upgrade to cloud systems.

Calipsa asked Joe Carriker, Director of Physical Security at University of Tennessee, Knoxville, where he thinks campus security is headed next:

As many colleges and universities consider cloud technology updates to their video monitoring systems, they may find themselves in unfamiliar territory. The latest wave of video monitoring technology promises to identify and alert security staff to threats with the help of AI and motion detection. However, many of these cameras end up inundating staff with false alarms.

The good news is that intelligent video analytics software can bolster the entire campus security system by weeding out these false alarms, allowing security personnel to spend more time doing their jobs. Calipsa’s false alarm filtering software can filter out up to 95% of false alarms, and as a cloud-based solution, it takes just a few clicks to install. It's also compatible with the major video surveillance players, making integration easy.

Integrating smart solutions like video surveillance and intelligent analytics into campus security will help universities to remain compliant with legislation like the Clery Act, whilst also relieving the burden on security staff.

However, as Joe Carriker points out, it is important not to lose sight of cybersecurity risks in the rush to enhance physical security:

As physical security relies more and more heavily on technology, university campuses will need to take a rounded approach to their security strategies and solutions. By investing in smarter security now, not only can they fulfil their duty of care to current students, they can also protect their reputation and financial prospects in the long term.

Click here to learn more about how university campuses can maximise the value of their video surveillance using intelligent analytics.