Storms are no match for Calipsa's algorithms

During the week of Monday 14th February, several storms made their way across Europe and the United States. Storm Eunice affected several countries on its route, but in the United Kingdom it was one of the worst storms in over 30 years, causing serious damage. The UK’s Met Office issued the highest red warning to the parts most likely to be hit by the storm, while the rest of the country received an amber warning.

Extremely strong winds and rain cause severe danger and disturbance - trees are blown around, some are even completely uprooted. Debris such as roof tiles and bricks can be dislodged and travel some distance. So it makes sense that the storm would have caused a lot of disturbance to security cameras too. Cameras are likely to send false alarms in normal weather conditions if they pick up motion like trees or tarpaulins caught by breeze - so how did they react to Storm Eunice?

To find out, we decided to look through our alarm data for the week of the storm. Since Calipsa’s machine learning algorithms identify and filter out false alarms, we wanted to see if false alarms rose dramatically during the storm - in other words, could our intelligent video analytics cope with the amount of disturbance caused by extreme weather? And as a result, could we tell if storms generate more false alarms than normal?

According to our global alarm data, a week of stormy weather meant we started by recording 6.7 million total alarms on Monday 14th February, and ending it with 8.4 million alarms on Monday 21st - a difference of 1.7 million. 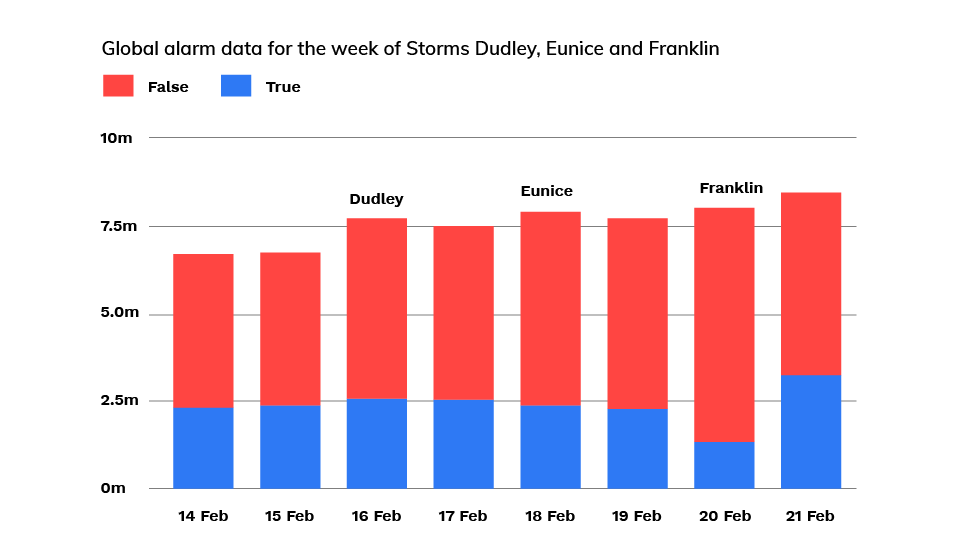 Let’s look at how Calipsa dealt with false alarms during peak storm times. Between Tuesday 15th and Wednesday 16th during Storm Dudley, total alarms increased by nearly a million (955,211). Of that spike, 79% were false alarms (752,194). We see another marked increase when Storm Franklin began on Sunday 20th - on that day, global false alarms spiked by over 1.2 million.

Delving into our UK alarm data, we can see how Calipsa reacted to disturbances caused by the storms in that specific area. Storm Dudley hit the UK on Wednesday 16th February, closely followed by Eunice on Friday 18th and Franklin on Sunday 20th. Compared with the global data, we can see that the spikes in false alarms are more pronounced when the storms arrive in the UK. 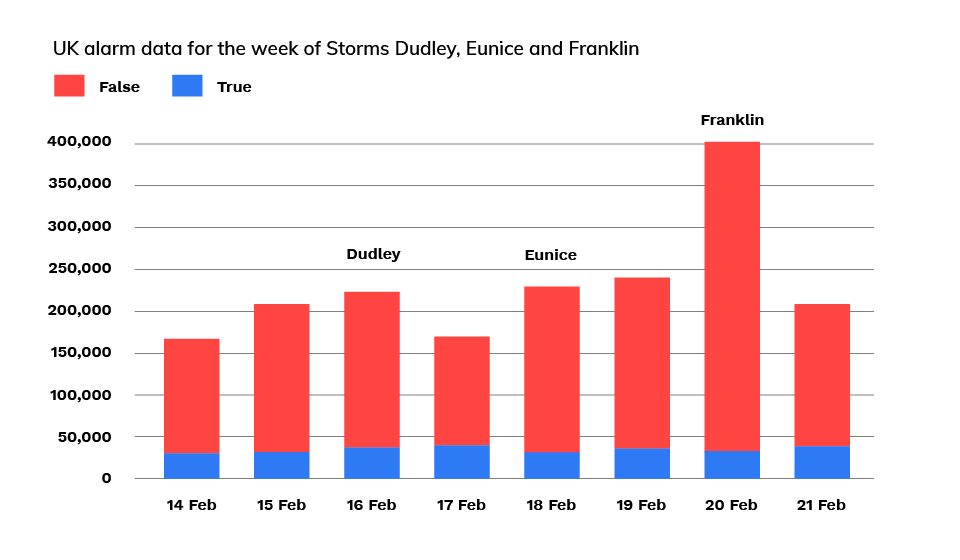 We can see peaks in false alarms during the three storms, the most significant one being Franklin; here, we see a jump of around 20,000 false alarms in a single day. Despite the fact that Eunice was the most severe storm, Franklin is the one where Calipsa’s False Alarm Filtering picked up the most alarms. It’s possible that in the sites where Calipsa is active, there was more disturbance on that day, or potentially an increase in scene change alarms flagging damage.

All three storms caused a great deal of disruption and dangerous conditions - but Calipsa’s Pro Analytics continued to help security teams do their jobs without the headache of excessive false alarms. Daniel Latto, General Manager of ARM Secure, explains how Calipsa helped his team:

“The technology we have in place like Calipsa means we are able to provide the same level of service during bad weather, like we have seen during Dudley, Eunice and Franklin storms. The level of service we strive to deliver to our customers goes hand-in-hand with Calipsa. Whereas in the past we had to pull in additional resource just to filter out the noise and unwanted traffic, now we can use our skilled operators to deal with 'real/true' events and provide a higher level of customer service.

Not all bad weather comes with so much notice or media coverage as the storms we have seen this month, so with Calipsa enabled on our CCTV estate we are able react and support our customers without having to necessarily pull in more resources at short notice.”

So far, Storm Eunice is reported to have caused around £360 million of damage. The costs of business interruption are unknown at this point, but are likely to be even higher. For security teams like Daniel’s, using a smart analytics tool like Calipsa enables them to continue providing the same levels of service without paying for the additional support usually needed during challenging weather conditions.

So come rain or shine, you can rely on Calipsa’s Pro Analytics to help your security teams deliver the same levels of protection and customer service.

Learn more about Calipsa's Pro Analytics product range - click here to explore all of the features in Detect, Detect Pro, Protect and Investigate.